Note: Owen responded to his critics which led to this follow on blog.
Owen, I appreciate I and others have been giving you a hard time over the past few days.  I suppose if I’m honest I’ve been hoping to get an explanation, you are after all a considerable voice for the Left so your tweets and articles matter.

So perhaps it’s fairer to simply ask you directly, what has changed your mind so drastically in the past 12 months on Brexit?  Why did you pivot from fighting it to actively supporting it?

You spoke, as we know, at the large “March for Europe” last year.

That march was the most obvious outpouring of grief, anger but also hope from remainers, particularly young remainers and you spoke passionately for several minutes.  Yet in the past few weeks you appear to have changed your stance almost completely.

At that speech you said:

Those who led the leave campaign, who based their entire campaign on lies and stirring up bigotry, that’s who we’re taking on

And you were right to say so, in fact if anything the lies of the Leave campaign have become even more obvious since that day.  Yet, actually, your position now is that the referendum is a democratic event which must be respected without question despite those lies. 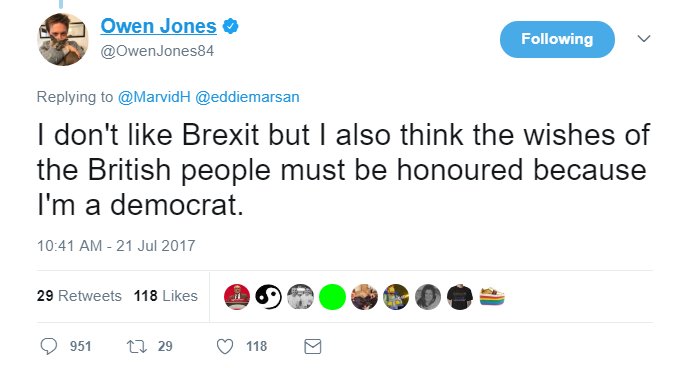 Which is also true and a perfectly respectable position for a life long activist who has pushed against the tide his entire adult life. Yet, here again you are now saying that the referendum is NOT like a GE and therefore we should in fact essentially shut up basically forever. 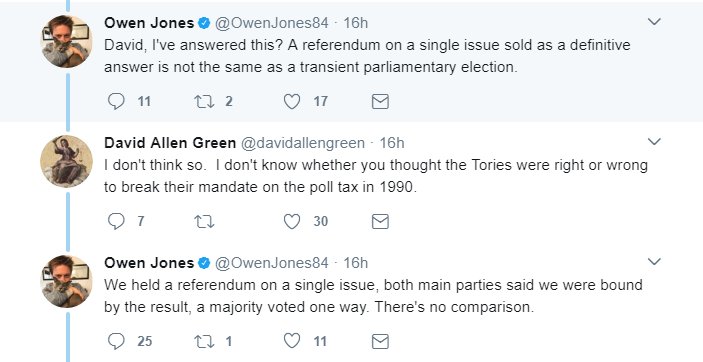 At that rally you said it was up to all of us to fight for our relationship with Europe, to fight for our future.  You’ve been almost silent on the EU since it became clear that Corbyn wanted out of the Single Market.

Finally, you spoke with some passion of the xenophobia stirred up by the Leave campaign, the immigrant bashing and scapegoating.  Today we’re greeted with this headline:

Now, yes, perhaps Corbyn’s comments were more nuanced (though frankly not much) but this headline is straight out of the UKIP playbook – it continues the fake narrative that we’ve been overwhelmed and undermined by cheap foreign labour.

You’re a bright chap.  You know that the above headline language, even if taken out of context, is damaging and negative.  It is literally “coming over here and taking our jobs”.

So, it’s a simple question – you cannot hold these views AND believe the things you said back in September, so what happened to change your mind?  You must accept its a fair question, if you’re going to speak at public “remain” events and then have a radical change of heart to the point that you’re essentially saying resisting brexit is undemocratic, the lies of the Leave campaign no longer matter & it’s OK to now say immigrants are stealing UK jobs (I appreciate you haven’t said this but nor as far as I know have you condemned it so far) then it’s reasonable that we know why.

Because if you can’t explain it, does it mean that your position is simply defined as whatever Corbyn thinks at any one time?

One thought on “Dear Owen….”